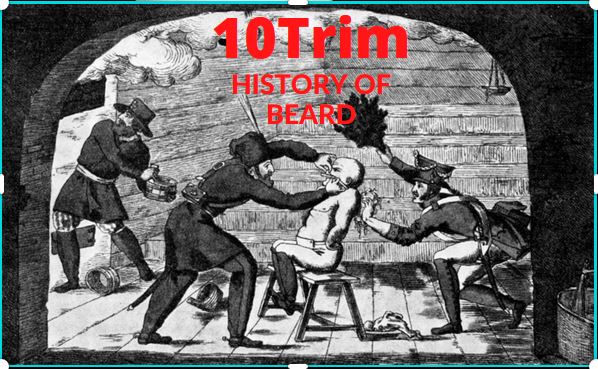 Ancient Greeks revered the beard as a sign of virility and men that had the capability to grow hair on their face were greeted by a hearty beard scratch when walking into a room. To them having a clean-cut face meant one of two things; either you were effeminate or you were mourning for the loss of a loved one.  Parting with your beard was comparable to losing someone close and was shaven as a sign of respect and admiration to the departed. All of the celebrated Gods had beards, so growing one was as close as you could get to Godliness, to hell with that cleanliness idiom.

In the Middle Ages, the most valiant knight faces were covered in hair and if you had no facial hair you took the chance of being mistaken for a priest. They were required to keep a clean face as a tribute to their celibacy. So basically not having a beard is advertising your virginity.

All the highest members of Egyptian societies grew their facial out. Their kings were “crowned” with a gold false beard called a postiche. The beard was held in such high regard that even the queens would don the postiche. Some say that it was the Egyptians that started beard grooming and turning them into works of art using tongs and curling irons to help shape them into elaborate patterns. They would also decorate them with different rings and other jewelry.

some of the greatest beard hair in history

Alan Moore is one of the greatest literary minds on the planet. He also has some of the greatest beard hair in history. I am sure that growing up in the ’60s and ’70s will have that effect on a young man from England.

He is known throughout the geek culture for his works, The Watchmen, The League of Extraordinary Gentlemen, V for Vendetta and the widely celebrated Batman story, The Killing Joke, but his beard hair is clearly what defines him when we walk around in the general public.

Alan Moore has had a beard longer than I have been alive and does not plan on getting rid of it anytime soon. Now, the man keeps it clean and in check, so don’t get the idea that his facial hair extends past his knees. He is after all commonly known as one of the most important British writers in the past fifty years.

Best  How to Shape a Beard Properly - The Easy Way

Having grown up in the time of free love and self-expression influenced his writing style as well as his beard hairstyle. It was a time where having a beard was an expression to the world that it didn’t matter if you were Corporate Bob or G.I. Joe fresh from the shores of Vietnam your beard let everyone know that you were a man and the longer the better.

Women adored men with beards because it was a symbol against the man. You didn’t need his money or his help and as long as you had an open mind, you could get anywhere. All the most creative men sported beard hair such as Jim Morrison, Grizzly Adams, and Kenny Rodgers and Alan was to join their ranks by publishing, drawing, and writing his own comics.

Ever wanted to grow a beard? If so you’ve probably tried a few different times and failed to achieve the look you wanted. I know the scenario all too well. You skip a couple of days shaving then after countless minutes of staring in the mirror you decide, you can’t grow a beard. Most people give up for a few different reasons.

Why you quit on your beard?

I have repeated this cycle (hey I want to grow a beard, let it grow a few days, nope looks terrible, people will laugh, shave it off, repeat). The reality is, these are not reasons they are excuses, most men can grow some sort of facial hair. Growing a proper beard takes the proper preparation. Some men may be only able to grow a mustache, some wicked long sideburns, a Goatee, etc. The reality is that you will not know until you simply let it grow. Time will decide what beard is right for you. Are You ready to begin your Beard Journey check out my top 5 tips for starting a beard below.

The latest and greatest hair growth secret isn’t some fancy European spray-on hair formal. It’s simply providing your body with the nutrients it needs by eating a well-rounded diet. Health industry experts agree that a balanced diet with the correct amount of protein, iron, and other nutrients will assist in improving the overall health, look, growth and feel of your facial hair.

Best  No Shave-November Details – The Ultimate Guide to Growing Beard

Hair is made up of mostly proteins. Especially proteins are known as keratin. For most of us, roughly 90% of our hair is still in it’s growing cycle. For every hair on your body, the growing cycle lasts two to three years. After the growing cycle, your hairs enter a resting cycle that lasts anywhere from 2 – 3 months before they are replaced by new hairs. If you aren’t getting enough protein in your diet, your body could prematurely send your hair into the resting cycle.

United States Department of Agriculture recommends that you, make half your plate fruits and vegetables switch to skim milk, MAke attest half of your grains Whole, and carry your protein food choices.

Just like any other physical change in your body, you need the right building blocks. Most multivitamins contain Biotin which is essential for hair growth.

Biotin is a natural Vitamin. It can be found in various foods, Swiss Chard, Carrots, Almonds, Chicken Eggs, Halibut. If you can push yourself to eat one of the above foods every day, no worries. Biotin is contained is most multivitaminS. Simply head to your local grocery and check the ingredients on their multivitamins.

Additionally, none of us are perfect with our dietary intake and try as we may we inevitably miss important minerals & nutrients in our daily food intake. Taking a multivitamin good for your overall health and like Jack PAssion (Two-time world beard champion) Says “healthy man, healthy beard”.

The condition often early on. Beards Men have varying views on how often you should condition. In the beginning, the scratch and itch from your growing beard will be one of the largest hurdles you have to overcome. I recommend conditioning once every other day. This is probably a good time to decide whether to comb it several times a day, to ensure an even shape, or go without conditioner, for a more tangled up natural beard. For those wanting a more natural beard to begin with every other day condoning then reduce to an ounce a week, to one month, etc … this will relive initial itch issues.

Physicals demanding exercise will increase your testosterone. Well, the ruling is acutely kind of out on this one but personally I can dig the logic behind it. I think Increasing your testosterone through demanding exercise, pushes your body to produce most things at a higher rate, so why not beard hair. Again Jack Passion (Two-time world beard champion) Says “healthy man, healthy beard”.

Tip #5 Set a Goal for your beard

Set a goal and make a plan based on the type of beard. Do your research, check out all the great beard tips and guide on 10trim. Most guys can’t grow a beard in a few weeks. I’ve set a goal of 3 months before my first trim and one year of total commitment to beard growth. Put some brainpower to this decision and stick with it. Generally speaking after 3-4 months you should see the natural shape of your beard.

The hardest part about growing a beard is just sticking with it. Day after day you will look in the mirror and over examine the growth of your beard. Most people won’t look that closely, accept any criticism with a warm smile. Those that choose to criticize are not worthy of a bearded men’s time. We bearded men don’t have time to worry about other judgment, save that for the naked face feminine men of the world. Grow your beard now!